Siân represents the UK in Uzbekistan 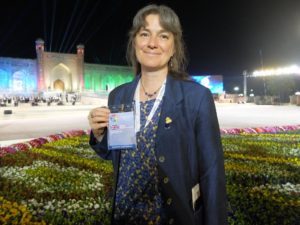 Coppersmith and HCA member Siân Evans represented the UK heritage crafts sector at the first International Handicrafters Festival in Uzbekistan in September. Siân was invited by The Embassy of the Republic of Uzbekistan in London represent the country and to demonstrate coppersmithing and talk about her work. According to the HCA Red List of Endangered Crafts she is one of five known ornamental coppersmiths working in Britain today and the idea of cultural preservation through the language of crafts skills was a core theme at the Festival.

After the flight into Uzbekistan, delegates from seventy-nine countries were taken by train, over the mountains and into the city of Kokand, which had recently been granted the status of Creative City of Crafts and Folk Art by the World Crafts Council. The reception was extraordinary – crowds cheering, bands playing, children dancing – marking the start of a very special event.

The festival itself was held in the grounds of the Palace of Khudoyar-Khan, where a village of yurts, tents, marquees and huts had sprung up, each housing a working craftsperson. All fifteen regions of Uzbekistan were represented and international flags showed where the overseas visitors were based. On the first day there was considerable press interest and as a result, crowds grew each subsequent day.

On Saturday 14th a huge opening ceremony took place, in the presence of the President of Uzbekistan Shavkat Mirziyoyev. In his welcoming speech, he spoke of the value of craftsmanship in universal culture and how it “occupies a special place in the life of each nation, shaping its mentality and values”.

He added: “the craftsmanship derives inspiration in harmony with nature” and that in order to “breathe life into an ordinary clay, piece of metal or wood… there will be needed not only scrupulous work, but also the warmth of human soul”. 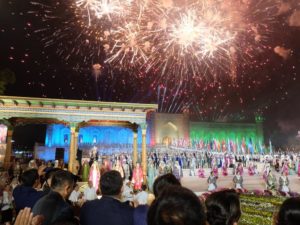 The final two days of the festival were spent meeting new people, discovering the beautiful work, sharing skills, laughing and dancing! Many craftspeople (especially those in obscure or dying crafts) spend a lot of time working in isolation and so this new sense of a global community was not only profound, it was a revelation.

The generosity of the hosts was overwhelming at times, but the most moving gift was given just as it was time to leave. As the delegates boarded the train to return to Tashkent and fly back to their homes and workshops, they were each given a simple work apron, with the emblem of the festival on it.