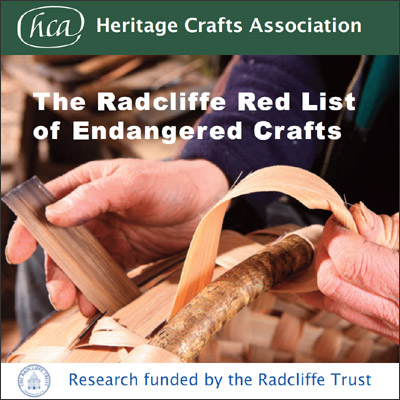 New research by the Heritage Crafts Association and supported by The Radcliffe Trust has found many traditional craft skills in the UK to be hanging on by a thread.

Seventeen crafts have been identified as being critically endangered, including coach and wagon making, saw making, metal thread making, and swill basket making. These crafts have very few practitioners, usually spread across just one or two businesses, and few have any trainees. The reasons crafts become critically endangered are varied, but may include limited opportunities for training, low financial viability, or no way for the skills and knowledge to be passed on.

Greta Bertram, who led the research on behalf of the Heritage Crafts Association, said:

“The Radcliffe Red List of Endangered Crafts is the first research of its kind in the UK. We’re all familiar with the idea of a red list of endangered species, but this is the first time the methodology has been applied to our intangible craft heritage. While some crafts are indeed thriving, the research has shown that all crafts, and not just those identified as critically endangered, face a wide range of challenges to their long-term survival. When any craft is down to the last few makers it has to be considered at risk as an unpredicted twist of fate can come at any time.”

The UK has amazing heritage buildings which are supported by different agencies and which also can also provide a source of income.

We also have a great heritage of traditional craft skills and world-renowned makers, yet these skills and knowledge receive little recognition or support, largely because they fall between those bodies which advocate for heritage and focus on buildings, monuments and artefacts, and the arts which emphasise the new and innovative. Thus, heritage craft skills have declined rather than thrived in the way that they could have; by replenishing and enhancing the stock of treasures which populate our heritage buildings and people’s homes.

“We would like to see the Government recognise the importance of traditional craft skills as part of our cultural heritage, and take action to ensure they are passed on to the next generation. Craft skills today are in the same position that historic buildings were a hundred years ago – but we now recognise the importance of old buildings as part of our heritage, and it’s time for us to join the rest of the world and recognise that these living cultural traditions are just as important and need safeguarding too.”