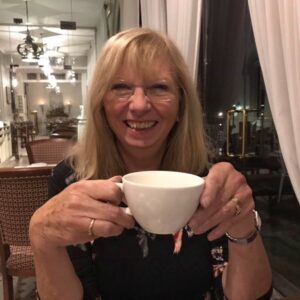 Veronica Main from Hazelmere in Buckinghamshire has been awarded an MBE in the Queen’s New Year Honours List 2021, in recognition of a lifetime spent researching, practicing and teaching the craft of straw plaiting for the hat industry.

Veronica was nominated by the Heritage Crafts Association in this year’s New Year Honours, following 19 previously successful nominations since 2013. Last year, the charitable organisation – which was set up in 2009 to support and champion traditional craft skills – published the latest edition of its groundbreaking HCA Red List of Endangered Crafts, the first report of its kind to rank craft skills by the likelihood they will survive into the next generation.

Once an important trade in the UK, straw hat plaiting is now critically endangered on the Red List, with only a few remaining craftspeople. Veronica has made it her life’s mission to ensure that these skills are not lost, and only last week was on BBC Radio lamenting the closure of Luton hat firm Olney Headwear.

Veronica has been involved with Wardown House Museum and the Culture Trust in Luton for over 30 years – first as volunteer, then ‘Hat Plaiter in Residence’, and finally as Curator – becoming the go-to expert for the history of women’s hats and hat making. She has been a consultant on straw work to museums across the world, including the V&A and the Museum of London. 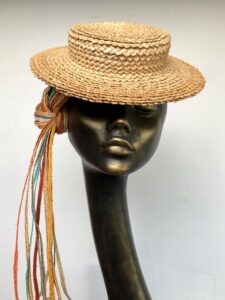 Hat made by Veronica in collaboration with Lucy Barlow for the ‘Royal Ascot at Home’ millinery auction 2020 to raise money for NHS Charities.

Over the years Veronica has taught many hundreds of people the skills of straw plaiting in the UK, US, Europe and Bangladesh, where she taught straw work to the women of Sreepur village, to increase their repertoire of craft skills.

Veronica is a Queen Elizabeth Scholar, Wingate Scholar, City & Guilds Gold Medallist, and member of the Guild of Straw Craftsmen and the National Association of Wheat Weavers (USA). She is a founding member of the British Hat Guild, a group of 33 professional milliners at the top of their game, each selected for their highly individual contribution to millinery. In 2003, she published Swiss Straw Work, a comprehensive guide to straw plaiting and other techniques that were common in Switzerland and across Europe.

“Often it is only in retrospect that we realise that particular craft skills have survived purely thanks to a few dedicated individuals, working tirelessly to safeguard the future of our intangible heritage so that future generations can use them as a basis for innovation, industry, connection and wellbeing. Veronica is a shining example of this and we are delighted that we have been able to recognise her skill and commitment through this successful MBE nomination, putting her up there among other great luminaries of public life.”

The HCA encourages anyone who supports the continuation of traditional craft skills, whether or not they are makers themselves, to become HCA members. We have set up an Endangered Crafts Fund to provide small grants to projects that increase the likelihood of endangered craft skills surviving into the next generation, and are currently seeking donations to save more of Britain’s most endangered crafts from oblivion.