In 2019, Deborah was awarded £2,000 from the Endangered Craft Fund to help restore the Royal Loom. She aims to be designing and weaving her own linen damask on the loom when the restoration project is complete.

This project was generously supported by Allchurches Trust. 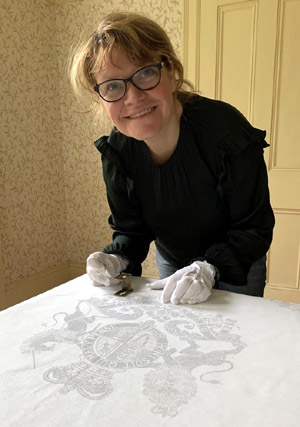 Stopping in on his way home from school at his father’s workplace was an everyday occurrence for the young Vincent Green. What was not quite so everyday was the factory itself, nor indeed the work that his father James undertook. More than sixty years on he still vividly recalls the dimly-lit factory, the single bare lightbulb dangled above his father’s head, the cumbrous, almost primeval wooden loom with its mysterious complex of cords and lead weights, and the race of the shuttle and the rhythmic beat of the sley. On occasion his father would stop off from his work, dismount the seat board and sit himself on a concrete block to have a quick cup of tea and a chat with his son. Any curiosity the young Vincent displayed for the craft was, however, promptly dampened by his father. Though a third generation hand-loom weaver, James remained adamant that none of his seven children would continue the tradition. And in spite of his evident pride in weaving for the newly crowned Queen Elizabeth II he remained firm in his conviction that weaving was ‘a dead-end street.’ The 1950s held the promise of better education and jobs, and that was the future he wished for his children. 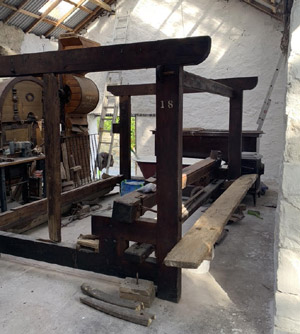 None of his children ever did follow him into hand-loom linen damask weaving. Indeed, the industry came to a complete end soon after in 1968, closing a tradition that had spanned nearly three centuries in the Lurgan region of Ulster. The factory was abandoned and the loom itself dismantled, many of the point-paper designs and the Jacquard punch-cards heaped into piles and burnt, or left to rot in the open. The craft had indeed reached a dead-end. Fifty years later, however, a remarkable turn of events has shone a beam of hope for the craft. “Would I like to have a look at an old loom that has been lying in a barn” was a question that did not have to be asked twice. It proved to be a ten-quarter broad loom, and the owner was anxious that as a hand- loom linen damask weaver I take it into my care. Countless hours trawling through archival records, interviewing those involved in the last days of hand-loom weaving, opening up a past that had been mostly forgotten led to the realisation that the loom was in fact the ‘Royal loom’ that James Green wove on all those years ago, his name lightly scratched into the frame.

The Heritage Crafts Association was quick to recognise its significance and its Endangered Crafts Fund grant has sparked a remarkable journey. Once supported by a network of ancillary crafts, hand-loom linen damask weaving now stands alone, the restoration of the loom necessarily drawing on a range of local artisans to make bespoke components, from Mark Hanvey, an exceptionally gifted cabinet maker to James Adair, a saddler with commissions from the Queen. Another, Andrew Hilary, a tool maker, works from the very factory in which the loom last stood! The scale of works and its complexity means it will be a long journey but one that will lead to the first broad-loom linen damask weaving in Ulster for over sixty years. It also affords a platform for my AHRC/NBC funded doctoral study of Irish hand-woven linen damask, and without the encouragement and support of the HCA none of this may have happened. So, it is thanks to them that a new pathway is being forged, an escape from the ‘dead-end’ that James Green had predicted all those years ago. How apt that it is his loom that has given us the chance.

This project was supported by Allchurches Trust.