Forging a future for glassblowing

From Chemistry World, reproduced with permission. 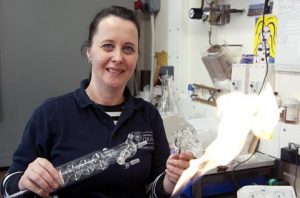 Terri Adams from the University of Oxford, UK, ‘stumbled’ into scientific glassblowing. She was touring the University of Bristol’s chemistry department while waiting to take up a job in forensic science. ‘I had never seen anything like the complexity of the glassware items which were on display, let alone given a thought to how they’d been designed and made or by whom,’ she recalls. ‘I was completely captivated and spent a significant amount of time talking to the glassblower at the display.’ She then saw an advert for a trainee scientific glassblowing technician at Bristol and applied for the role. ‘The rest, as they say, is history.’

Adam King has been involved in traditional crafts all his life, having grown up doing craft events with his dad Stuart King. He is now one of the last besom broom makers.

Adam cuts young birch branches in the winter and dries them thoroughly, bundles them and wraps them really tightly with wire bindings. Then the top of the broom is trimmed with a huge and very sharp axe. It’s quite a bit of work for a £12 broom … hard work but rewarding and keeping a skill alive that goes back centuries and is still useful today.

Jon Henley has written an article about Adam in the Guardian and Adam’s website can be found here.

Whilst there are a few willow basketmakers about, it is still a declining craft. There are a good number of amateurs and many people using basketmaking skills to produce sculpture, the area that is in decline is the full time working basketmaker producing functional baskets and this is arguably the area that demands the highest skill – some would say that it is only through production work that your skills become honed.

Rob and Julie King work hard and make beautiful functional baskets at a speed that makes them affordable. Basket making is hard on the hands and speed and efficiency is everything if you want to make a living.

Until a couple of years ago Jeremy was the only clogmaker in the country still using the traditional knives to hand cut clog soles and make traditional British clogs. The knives are not easy to use but once mastered give tremendous controlled power and leverage.

British clogs always had a wooden sole (alder, birch or sycamore) and leather upper, unlike the Dutch and French sabot. There is a lot of understanding that goes into making a clog that is comfortable to walk in rather than just stand still in and Jeremy’s just work.

Owen Jones learnt his craft from a retired swiller at a time when nobody else would take it on and has single-handedly kept it alive for nearly 20 years. The swill is a Lakeland basket and they are regularly pictured in Beatrix Potter’s books. Designed for tough farm use such as picking potatoes, they later found a large market hauling bobbins round the Lancashire cotton mills. Today they make the perfect laundry basket, holding just a washing machine full.

The difference between a swill and any other basket is that it is made from oak. First Owen has to cut and split his oak into sections about an inch square by two, three and four foot long, then he boils them for many hours. The next morning is riving day – he fires up the boiler again and when the water is hot he picks out the bits of oak one at a time and whilst still hot he tears the oak apart again and again until he has thin strips. These then have to be dressed by scraping them with a knife before they are ready to weave. Compared to most basket makers who can buy a bundle of willow ready to weave it is incredibly time consuming.

Owen has taught around 1,000 people over the last 15 years how to make a swill, but once people see how much work goes into one few ever think about setting up to make more. Over the last couple of years Owen has managed to pass the skill on to one other maker who had been doing quite well but sadly he has been suffering from problems with his wrists. This all goes to show how potentially fragile a craft is when you only have one or two makers.

Last year Owen was filmed making a basket on the popular Victorian Farm program and since he has had a great demand for his work by mail order and all his courses are fully booked. He never struggled to sell all he could make at the price he charges though and is now finding he struggles to find time to do the other important stuff in life like tending his veggie garden and going for bike rides.

Sadly, Trevor Austen passed away in 2010. The following text is from a case study from 2009.

Trevor Austen was a rake maker from Smeeth in Kent, whose workshop had been in continuous production since 1871. What made Trevor unique was that he was the last rakemaker who was using locally-sourced timber. He used coppiced ash for all parts of the rakes and cut the trees up and made all parts of the rakes in a one-man business.

Trevor took over the business and saved it from closing in 1966. He had seen the ups and downs typical of many a rural craft over the years, but kept going. He would make up to 100 rakes a week and sell them direct to the public at crafts shows, and had more recently been exporting rakes to the USA, Germany and Japan. It was a viable business working without any subsidy, contributing to the economy, but not strong enough to take on staff, train apprentices or expand.

Trevor had hoped to continue working as long as possible and finally to attempt to pass the business on as a going concern, but sadly after several years of illness Trevor was diagnosed with motor-neurone disease. Whilst there is no support network for rare craft businesses when they are running, there is money to record them when they close down, so two short films have been made of Trevor’s rake workshop: one by the Museum of English Rural Life and another funded by a £16,950 Heritage Lottery Fund grant to the Agricultural Museum at Brook.

Trevor has lost power and co-ordination of his body, yet his mind is active – a difficult position for a craftsman. Here he is explaining how the rake works came to close down:

“I had hoped that my brother would take on the workshop but my landlord died, making his son the new landlord. He sees the site as development, alongside the redundant farm yard next door, so has not been keen to have the tenancy change names.

So our machinery is finding new homes with people who will use it at shows etc. Hand tools are finding homes for use when barters are offered. A few pieces will enter a local museum.

Little room was left for us save it, other than for others to pick the bones clean, then try to break it all up giving my family a bit of money for their efforts – little that it will bring. Sorry I have a bitter tone with me – I will get more amenable as the disappointments wear off.”

It seems sad that this viable business should close its doors at a time when many folk would love to work in such a fulfilling job. There are many more businesses like this that will go in the next ten years. Our aim with the Heritage Crafts Association is to highlight their plight and create conditions that enable the skills to be passed on before they are lost forever.

... to our running costs
... Endangered Crafts Fund
... become a Benefactor
... or Corporate Sponsor

Our #MondayMaker today is coppersmith Robert Fuller, a seventh generation metal worker whose inspiration is his cousin John Fuller, author of 'The Art of Coppersmithing' published in 1894. https://ift.tt/2RURq6C