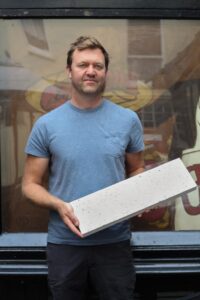 In 2020 Ben Bosence of Local Works Studio was awarded funding through the Endangered Craft Fund for his ‘Winning the Clay’ Project, a historic term for finding clay materials suitable for making bricks and tiles.

The Endangered Craft Fund Grant was used to purchase a Roller Pan Mixer to enable the processing of materials sourced from site. These materials could include waste clay excavated from foundations, utilities and site works, crushed waste brick, concrete and other aggregates, waste glass, local chalk and other materials.

Ben speaks of how he used to work for a Sussex based brick making company, and has witnessed the craft decline in this area and also (very dramatically) in Stoke on Trent in the early 2000’s.

“We are keen to tell the story of the craft – how buildings and landscapes were built using local materials, often very local, as brick making and the firing ‘clamps’ were located at the construction site. Rather than mine for raw materials, there is a huge opportunity to tell the story of collecting local raw clay and sand materials that are being excavated and removed from the area, whilst new bricks and tiles – often transported from other countries – are being used for buildings and landscape projects in Sussex.” 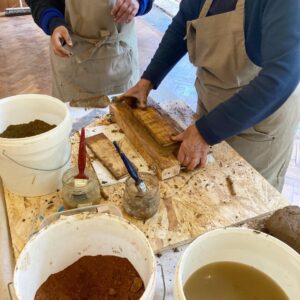 The first of many projects to benefit from this was the Exchange Erith. This is a community owned project that seeks to engage the local community in wide range of activities and workshops around making and developing crafts skills. As part of this they are creating a garden space designed by Sarah Price with handmade brick paving by Local Works Studio. These bricks were made using waste materials from site and Crayford Brickearth clay. Erith was once at the centre of the brick making trade that used Crayford Brickearth, a rare, locally occurring sedimentary deposit containing a blend of clay, chalk and sand particles. It was the material used to make the majority of Victorian London’s famous yellow stock bricks. By the 1960s a diminishing supply of clay, led all local brickyards to close. 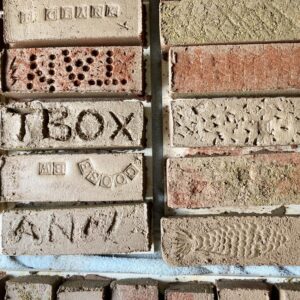 The bricks themselves were made by local people in a series of community engagement events.

“Many people came to the brick making session because they had relatives who worked in the local brick trade. They were full of stories of their parents or grandparents who had made bricks.”

Local Works Studio is now using the Roller Pan Mixer on a range of other projects including grinding chalk plaster for a listed building in Plumpton and a chalk-clay plaster for a new build in the South Downs.