Winners of the 2019 Heritage Crafts Awards 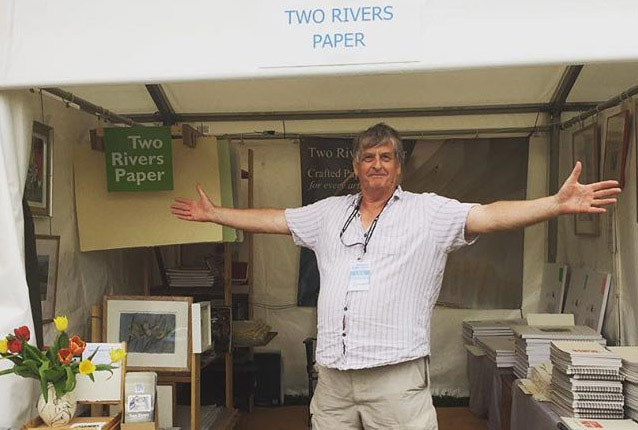 Handmade paper maker James Patterson has been named Maker of the Year in this year’s Heritage Crafts Awards.

Maker of the Year was one of six awards presented at the Heritage Crafts Association’s (HCA) annual conference at Cecil Sharp House, London on 9th March.

James is the owner and operator of Somerset-based Two Rivers Paper, which manufactures handmade paper for artists, printers and designers. Based in a 400 year old water mill, it is the only commercial business of its kind in the UK and one of only a handful in Europe. James won the award in recognition of the quality of his work, for his role in developing the skills of others, both within his own business and beyond, and for the innovations which are enabling him to keep the craft alive. 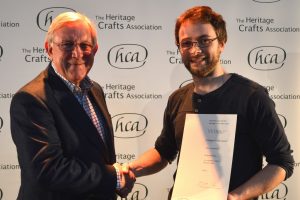 Clog maker Simon Brock from Sheffield won the HCA/Marsh Endangered Craft Award. This award, set up with the support of the Marsh Christian Trust, recognises a practitioner of one of the crafts listed in the ‘critically endangered’ or ‘endangered’ categories of the HCA Red List of Endangered Crafts. Simon makes bespoke clogs, primarily for clog step dancers and Morris dancers. He will use his award to study with master clog maker Jeremy Atkinson, learning how to carve clog soles entirely by hand using traditional clog knives. Simon also won the HCA/Arts Society Heritage Crafts bursary which will enable him to extend his studies with Jeremy. 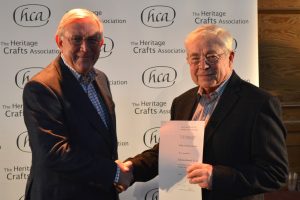 Tony Kindell of Aldershaw Handmade Tiles Ltd, winner of the ‘Made in Britain’ Award, with Nick Carter, Marsh Christian Trust.

Winner of the HCA/Marsh ‘Made in Britain’ Award is Aldershaw Handmade Tiles Ltd. The Sussex-based company employs traditional hand making methods using wooden moulds and 150-million-year-old local Wadhurst clay. The company is one of only a few still making sanded, rubbed or glazed mathematical tiles, used since the 1700s as a method of weatherproofing timber buildings in Kent, Sussex, Surrey, Hampshire and Northamptonshire.  Aldershaw’s terracotta tiles can be found in floors and roofs all over the country: on The Queen’s House at The Tower of London, Harmondsworth Medieval Barn, St James Church Piccadilly, the Real Tennis Court at Hampton Court together with the National Trust Village West Wycombe, English Heritage properties and many private estates. 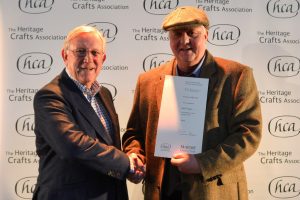 HCA/Marsh Trainer of the Year is Neill Mapes of the Small Woods Association (SWA). In his role first as a volunteer and then as SWA’s Heritage Crafts Officer, Neill has trained and mentored many thousands of enthusiasts, volunteers, SWA members and the general public in a wide range of crafts, including rake making, bowl turning, broom making, pole lathe turning, currach and coracle making. He leads the teaching of crafts skills at the Greenwood Centre in Coalbrookdale, Shropshire, and has an enthusiastic following on social media, which he uses to share his skills. 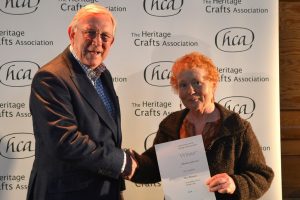 The HCA/Marsh Volunteer of the Year Award went to Toni Brannon for years of dedication to coppicing and woodland crafts, both as membership secretary of the Hampshire Coppice Group and as committee member of the National Coppice Federation since its inception in 2013. Toni won the award for her role in raising awareness of coppicing and for the contribution she has made to improving training opportunities for coppice workers and woodland craft practitioners across the UK.

During the conference, fore-edge painter Martin Frost MBE, and textile designer Kaffe Fassett MBE were awarded with certificates to mark their inclusion in The Queen’s Birthday and New Year’s Honours Lists. Both were nominated for their awards by the Heritage Crafts Association.

The Heritage Crafts Awards celebrate and highlight the traditional living crafts made in the UK that contribute to our national heritage. Applications for the next round of awards and bursaries open on 1 September. For more details, visit http://awards.heritagecrafts.org.uk/

Volunteer of the Year:  Toni Brannon