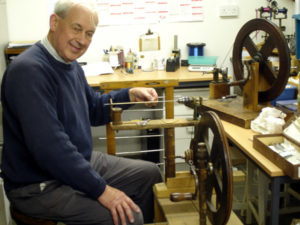 The Golden Threads workshop in East Sussex, one of only two remaining UK producers of metal threads for embroidery, is currently up for sale as a going concern, as owners William and Diana Kentish Barnes plan to retire.

Metal thread making, which is used extensively in military dress uniforms, as well as church altar frontals and vestments, has been listed as ‘critically endangered’ on the Heritage Crafts Association’s groundbreaking HCA Red List of Endangered Crafts since 2017. The Red List is the first research of its kind to rank the UK’s traditional crafts by the likelihood that they will survive into the next generation.

Golden Threads, which is described by the current owners as thriving, has a worldwide customer base and potential for growth. The successful purchaser will be provided with training in the craft of metal thread making and receive ongoing support from the current owners in an advisory capacity.