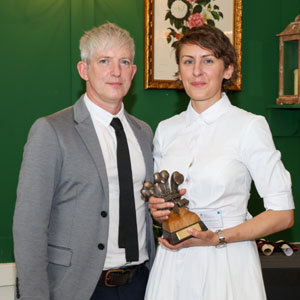 Birmingham-based watchmaker Rebecca Struthers has won the 2021 HCA President’s Award for Endangered Crafts. The prestigious award, and £3,000 bursary, was initiated by Heritage Crafts Association President HRH The Prince of Wales.

The HCA was set up 11 years ago as a national charity to support and safeguard heritage crafts skills, and has become well known for its Red List of Endangered Crafts, the first research of its kind to rank traditional crafts in the UK by the likelihood they would survive the next generation.

The President’s Award trophy was presented to Dr Struthers at a special presentation on Friday 10 September 2021, hosted by The Prince’s Foundation, one of the country’s major providers of training in traditional building skills. The Prince of Wales was in attendance at the presentation, which also saw a trophy awarded to 2020 winners, Paul Jacobs and Jonathan Reid from Ernest Wright Scissors, whose presentation was unable to proceed last year due to COVID restrictions. 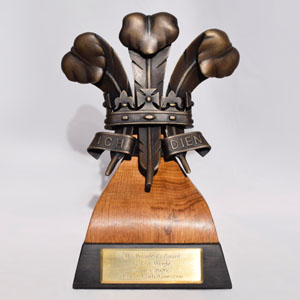 Between 1630 and 1890, England was the centre of global watchmaking, home to many of the world’s most celebrated watchmakers. By 1793, twenty thousand London watchmakers were part of the city’s population of one million inhabitants, representing around one fiftieth of the population. Today watchmaking is listed as critically endangered on the HCA Red List of Endangered Crafts.

Dr Rebecca Struthers is Director and watchmaker of a traditional watchmaking workshop and studio in Birmingham alongside husband and fellow master watchmaker Craig. They use traditional methods, materials and techniques in the restoration of vintage and antique watches as well as the production of her own timepieces. She is the first, and currently only, watchmaker in the UK to earn a PhD in horology. 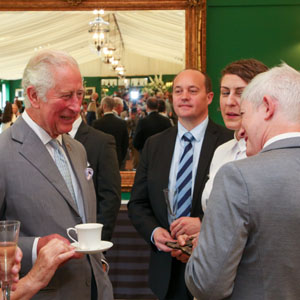 Award winners with HRH The Prince of Wales. Photo by Richard Ivey.

Dr Struthers is a Fellow of the British Horological Institute and Royal Society of Arts, a Trustee of the Museum of Timekeeping in Newark, and a Jury Member of the Academy, Grand Prix d’Horlogerie de Genève. She has received over a dozen awards over the years for her craft, design, entrepreneurship and research, and her work has appeared in a range of media including the BBC, New York Times and Wall Street Journal. She is currently writing a non-fiction book for Hodder & Stoughton on the history of time, told through watches, and the way in which they have influenced societies and cultures around the world.

Dr Struthers plans to use the prize to create a free-to-use educational website for anyone with an interest in learning the art of watchmaking. It would list training opportunities and facilities, and allow people to share projects they are currently working on and seek advice and feedback from a watchmaking community. It would also share useful technical information and charts, articles, a reference library and short videos on her own techniques for others to learn from.

“As independent makers the high costs of training a full-time apprentice means that even if it were possible, the apprentice’s pay would be so low that it would be prohibitive to people from disadvantaged socio-economic backgrounds. The President’s Award has provided us with the foundation to start something we hope will help to break down these boundaries and allow us to share what we do for free, in a manageable way for us. To have such a prestigious beginning for this project is an invaluable start!”

“Many people know HRH The Prince of Wales as being a long-time supporter and champion of traditional craft skills, and his passion is all too evident through initiatives such as the HCA President’s Award and The Prince’s Foundation. Dr Struthers and Ernest Wright Scissors are immensely deserving winners and we know that in their hands the prizes will provide a massive boost to the outlook of these critically endangered crafts.” 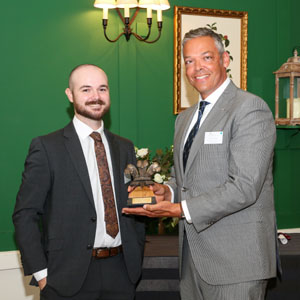 Following a tragedy in 2018, the company went into receivership and the critically endangered craft of scissor making was on the verge of disappearing from Sheffield. Paul Jacobs and Jan Bart Fanoy took action and bought the company, re-hired the remaining master putter-togetherers, Cliff Denton and Eric Stones, and took on several ‘putters’ in training. The factory is now back in action, with the prize used to repair machinery so that their putter-in-training can learn the craft from Cliff and Eric.

Click here to read more about the President’s Award trophies.