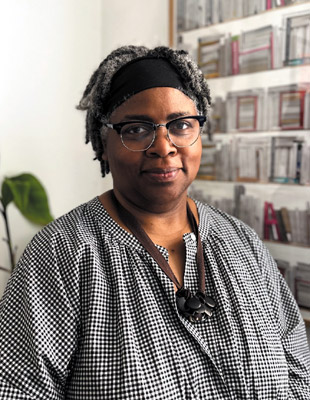 We are delighted to announce that Rose Sinclair is joining Heritage Crafts as our new Ambassador!

Rose is a lecturer in Design (Textiles) and Design Education at Goldsmiths, University of London, where she teaches textiles and design related practice at postgraduate level, including how technologies play a part in the aesthetics of the practice of crafting and making. She has passion for textiles and the stories that can be told through cloth, especially the stories of those often absent from the design discourse.

Rose’s PhD doctoral research focuses on Black British women and their crafting design practices, through textiles, through the lens of textiles networks such as Dorcas Clubs and Dorcas Societies, through which she discusses migration, identity and settlement. She is also interested in the use of textiles networks as a form of participatory craft practice and public engagement in crafts.

Rose continues to explore her textiles practice through participatory immersive workshops in local pop-up shops, installations and presentations in museums and diverse spaces such as the V&A London, The Bruce Castle Museum and House for an Art Lover, and Broadway Theatre, Catford. Her research work on Dorcas Clubs was recently featured in the BBC programme Craftivism: Making a Difference.

She is currently co-curator of the first retrospective of the work of the first textile designer of Caribbean heritage to achieve international recognition, Althea McNish, which will be showcased from 2 April to 11 September 2022 at the William Morris Gallery in Wathamstow. This exhibition is part of a three-year research, exhibition and archiving project titled ‘Althea McNish: Beyond Golden Harvest’, generously supported by the Society of Antiquaries through its Janet Arnold Textile Award.

Rose has authored several textile books, her most recent being Textiles and Fashion, Materials, Design and Technology (2015) and ‘Tracing back to trace forwards: what it means/takes to be a Black Designer’ in Textile Design Theory in the Making (2021). She is a member of the International Advisory board for Textile: Journal of Cloth and Culture, and Co-Editor of the Journal of Textile Research and Practice and is a member of the AHRC Stitching Together Network. Rose is the current Chair of the Global Majority Action Group (GMAG) at the Crafts Council.

• Read our values statement on what we mean by ‘heritage’

Our South West regional members’ network had a field trip to Mike Rowland & Son wheelwrights in Colyton today with @bestwheelwright and team! Thanks to Greg and co for sharing their knowledge and cream teas… eaten huddled under a gazebo in true British fashion!