MBE for wheelwright Greg Rowland in the Jubilee Birthday Honours 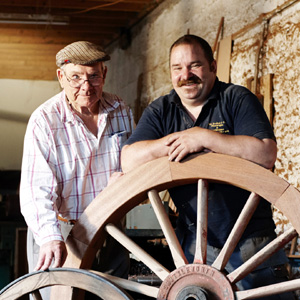 Wheelwright Greg Rowland has been awarded an MBE in the Queen’s Birthday Honours 2022, in recognition of his unparalleled craftsmanship and tireless work in ensuring their skills are passed on to current and future generations.

Greg was nominated by Heritage Crafts for this year’s Birthday Honours, following 23 previously successful nominations since 2013. Last year, the charitable organisation – which was set up in 2009 to support and champion traditional craft skills – published the latest edition of its groundbreaking Red List of Endangered Crafts, the first report of its kind to rank craft skills by the likelihood they will survive into the next generation.

Current Heritage Crafts / Marsh Charitable Trust Trainer of the Year Greg Rowland MBE runs his wheelwright company in Colyton, Devon, alongside father Mike who trained him as an apprentice. Their company has held a Royal Warrant since 2005, making and restoring horse-drawn vehicles such as carriages, wagons and trade vehicles, as well as countless military gun carriages.

Greg has been at the forefront of the drive to stop the decline in the number of wheelwrights, and was instrumental in developing the syllabus and training methods for wheelwright apprentices, going on to train two of his own apprentices.

“We are thrilled that Greg has been recognised in the Queen’s Birthday Honours in this special Platinum Jubilee year. Having traditional craftspeople up there with other great luminaries of public life in this way is vitally important, as unlike countries such as Japan and Korea we have no Living National Treasures scheme to celebrate master craftspeople, and the UK is one of only 12 of the 193 UNESCO member states yet to ratify the 2003 Convention on the Safeguarding of Intangible Heritage.”

Heritage Crafts encourages anyone who supports the continuation of traditional craft skills, whether or not they are makers themselves, to become Heritage Crafts members via its website www.heritagecrafts.org.uk.

The charity has set up an Endangered Crafts Fund to provide small grants to projects that increase the likelihood of endangered craft skills surviving into the next generation, and is currently seeking donations to save more of Britain’s most endangered crafts from oblivion – visit www.heritagecrafts.org.uk/ecf to find out more and to donate.