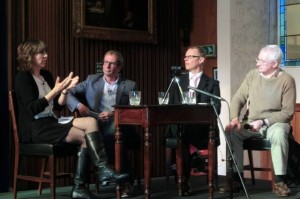 The morning (Making Matters) was spent with key speakers talking about how important craft and making is. The keynote speaker was John Hayes Minister without Portfolio. He replaced Skills and Enterprise Minister Matt Hancock who has had to pull out of the event. Lord Cormack, former Chair of the All Party Arts and Heritage Group and HCA Patron, also gave a short talk about the significance of making. This was followed by The Future of Craft – views of Craft Visionaries, chaired by Guy Salter. Where is craft going? What is hot? How should we be pitching our work to target the changing market.

In the afternoon (Marketing Makers) we had more great speakers giving targeted advice for your business to help you increase sales and profit whilst doing what you love.

The event also included the launch of new materials for teachers, developed in association with Farming and Countryside Education (FACE), with the support of the Ernest Cook Trust.

Guy Salter, Chair
Guy Salter is Founder and Chair of Crafted, the outstanding mentoring scheme for craftspeople, as well as Deputy Chair of Walpole, the luxury group. Whilst working for The Prince of Wales he also founded and developed Duchy Originals and is on the Council of The Prince’s Trust.

Professor Ewan Clayton – Craft Visionary
Ewan Clayton has just published his latest book, The Golden Thread – The Story of Writing –  which has had wonderful reviews (Telegraph, Financial Times, BBC Radio 4 ‘Midweek’). He is Professor of Design at Sunderland University and is co-founder of the International Calligraphy Symposium and the Foundation Degree in Calligraphy at Kensington Palace.

Dr Tanya Harrod – Craft Visionary
Tanya Harrod was awarded the James Tait Black Award in Edinburgh this year for her seminal work on the British potter, Michael Cardew, and was the author of the prize-winning The Crafts in Britain in the Twentieth Century. Tanya was previously a Trustee of the HCA and is now an advisor.

Sir Mark Jones – Craft Visionary
Mark Jones was formerly the Director at the Victoria and Albert Museum, and is now Master of Saint Cross College in Oxford. Mark was instrumental in the Heritage Crafts Association having its launch at the V&A, and he continues as one of the HCA Patrons.

Vanessa Swann – Craft Visionary
Vanessa Swann was awarded the Art and Business Garrett Award in 2011 for encouraging business support for the arts, and is CEO at Cockpit Arts and has changed it from a managed workspace to a place where craft businesses can grow.

The afternoon speakers and topics were:

Mark Henderson – Marketing
Mark Henderson has spent a lifetime marketing into the luxury sector and has a passion for British craft. He is chairman of Gieves & Hawkes and founder of The New Craftsmen. Mark is a director of the luxury trade body Walpole, a patron of the HCA and has acted as a mentor on the Crafted programme. He shared his top tips for marketing craft.

Horatia Harrod – What makes a good story
Horatia Harrod is Commissioning Editor at Sunday Telegraph. She reviews a wide range of media and being daughter of Tanya Harrod has a great understanding of craft. She helped us find the best ways to get our stories into the press for free.

Alistair Hughes – Pricing
Alistair Hugues created Savoir beds together with Stephen Winston, buying The Bedworks from The Savoy hotel in 1997 and creating Savoir Beds. Deciding what price to put on our work and achieving a price that allows us to make a good living is perhaps one of the hardest things for craftspeople to do. Alistair’s talk on pricing was simply the best..

Robin Wood – Internet marketing for craftspeople
Robin Wood turns bowls and plates on a simple foot powered lathe and has sold most of his work over the web for 15 years. This was not a techie talk it was about the simple things you can do to achieve more sales over the web with less effort. Robin is the chair of the Heritage Crafts Association.

The event was held at Carpenters’ Hall in the City of London – a great venue with fantastic craft all around. This event was only possible thanks to a grant from the Radcliffe Trust.