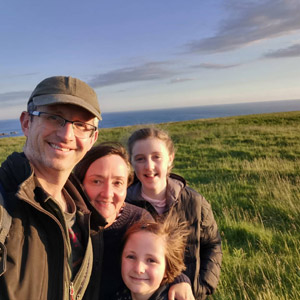 What does a normal day with the Heritage Crafts Association look like? If there is such a thing.

I start early with coffee. I spend a lot of time at the computer, especially during Covid, but I do also spend a lot of time talking to craftspeople. This mostly happens by Zoom at the moment and I can’t wait until I can start getting out again and meeting people in their workshops. This is a significant perk of the job, although I have to be wary of the occupational hazard that is wanting to buy all of the beautiful objects that I see being made! In normal times I would be on the train, meeting interesting and inspiring people, giving talks and trying my hand at various skills.

I do weave craft into my daily routine, I take knitting/thinking breaks and I have been known to stitch my way through long meetings (they can’t see my hands on Zoom). I use craft as a way to ‘de-frag’ my head; it helps me to focus and get my thoughts back into nice orderly lines. It was a revelation to me when I attended my first HCA board meeting and discovered that it was socially acceptable to knit! I had found my people.

How long have you been interested in heritage crafts and what started your interest?

I have never not been involved in heritage crafts. My dad, Gerwyn, is a maker of all things wood so I grew up playing with pole lathes and messing about in coracles. My mum, June, is also quite handy with a needle and so I was also doing patchwork, embroidery and sewing from quite a young age. She did also try to teach me to knit but I hated it and declared that I would never do it again; too slow and too frustrating. I didn’t really settle on a craft until I was in my thirties with a young child and a stressful job. I took up crochet when I was living in a yurt in Hampshire and it was the perfect craft for evenings on the sofa or by the fire. I found the rhythm and repetition very soothing and it is still my go-to craft for relaxation. The revelation was that it requires so few tools and can be on hand at all times. Crochet led me back to knitting and I now don’t go anywhere without a yarn-based project.

With hindsight, my unhappiest times have been when I haven’t had access to craft. I remember finding myself in my halls of residence in London that smelled of plastic carpets and vinyl, with no sewing machine and no bits of wood to play with, feeling really quite bereft. I now know that making things isn’t optional for me, I need it to keep my brain healthy.

Was there ever a time when you felt heritage crafts were uncool and you actually wanted to run away and do something different?

Well, there was that time when my dad turned up at school carrying a coracle…

Honestly, I don’t think being cool was ever much of a priority for me and anyway, the coolest people I knew were craftspeople and artists. My art teachers Warb and Meabh (a tapestry weaver) were my benchmark of cool and I used to hang out with them in the art department drinking black coffee and feeling like a grown up. I still visit them in the South of France.

I did well at school and so it was expected that I would take an academic route. I don’t regret this as such, but I do think that I should have done the Art and Design A-levels that I was talked out of in favour of academic subjects. Having said that, I very much value the critical thinking skills that I learned at University. I wish that I had found knitting while I was studying, I think I would have been more content. 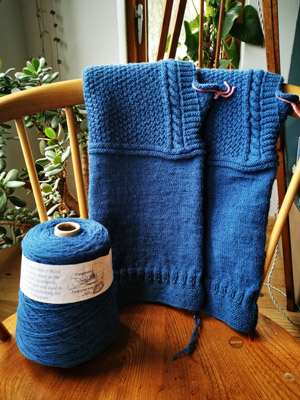 What prompted you to attempt a Gansey?

My professional answer would be that it gives me greater insight into the craftspeople I work with, but in reality it is more that I can’t pass up on a challenge! I have been involved in the Knitting The Herring project with the Scottish Fisheries Museum and, following one meeting, my colleague Daniel threw down the gauntlet with “so, are you going to make one?”  I made mine for my dad, who is a sailor and has built two wooden boats in his retirement. He is not a fisherman but he has always wanted a real gansey.

Can you tell us a bit about the history of Ganseys. Where were they made? By who and for whom?

It’s complicated, and there are differences of opinion, but it is essentially a working class tradition of fishing communities around the British coastline. The more I have learned about Ganseys, the more I can see that they are telling the story of fishing communities and connections across the North Sea. This is not a tradition of a single place but of travelling and exchange. Ganseys can also be found in the Netherlands and across Northern Europe as well as within fishing communities across the UK. They tell a story of hard graft, whether you were a fisherman or a herring lassie. Knitting would have often happened in down time, after a gruelling day of gutting herring. They were knitted by men and women, but mostly by women.

Ganseys were made as the high performance work wear of their day and had a number of features that made them suitable for the job: warm and windproof, high necked, shorter sleeves so they didn’t get soggy and using construction methods that made them easily mended. They would have been grubby, heavily darned items of clothing. Many old surviving ganseys were probably ‘Sunday best’ ganseys, the others would have been worn until they were unwearable.

Patterns were handed down by word of mouth, hand and eye. As a knitter myself, I can see that they also tell a story of female skill and creativity. They are not just practical, they were made with care, love and with beauty in mind. These women must have taken huge pride in their work and used it as a means of self-expression. They probably also knitted together, which is an age old way in which women have socialised together, just as we do today in knitting groups and clubs. 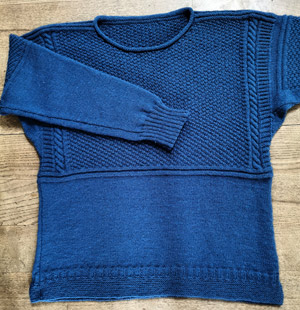 Is there truth in the stories about the patterns being for identifying drowned sailors? Why not just sew in a name tag like at school? Is this a myth made up late in the day?

I am fascinated by the stories and mythology that surround Ganseys; whether or not you believe that ganseys were knitted so that sailors could be identified if they were washed overboard, this is part of the mythology of ganseys. It is likely that these were just ‘yarns’ or tall tales, perhaps they were made up by sailors to add to the mystery. They did sometimes have initials knitted into them, so there may be some truth in it somewhere in the mists of time.

They do have locally distinctive patterns and there are variations between ganseys knitted in different communities. However, it seem obvious to me that, whilst there are patterns associated with different areas, women also would have knitted what they liked and took inspiration from others. In this sense, nothing changes.

What material are they made from?

They are made using a hardwearing ‘worsted’ spun wool which is different to ‘woollen’ spun wool. Worsted wool is smooth, hardwearing and slightly shiny compared with woollen spun wool that has more air and ‘loft’. The resulting fabric has really good stitch definition and is dense and warm.

The big question… it’s clearly a very fine yarn I imagine it took forever to knit. Did you time it? Or could you estimate?

Yes, it’s 5 ply and knitted on 2.25mm needles, which is very fine. Traditionally they are knitted on long steel pins but – confession time – I did mine on modern circular needles. I knitted mine over five months, but I probably do less than an hour a day. I reckon it took me about 150 hours in total. 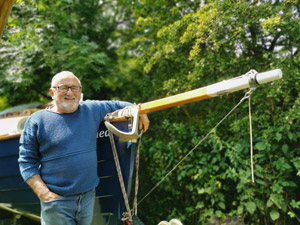 Gerwyn Lewis in his Gansey

I think I’ve heard you talking about knitting in the round as against knitting flat panels and sewing them together. Is that the way this is made? What are the advantages of one vs the other and when was each technique most popular?

Traditionally sweaters would have been made in the round in one piece, this is still common in Scandinavian knitting and has become very popular with contemporary pattern designers. Some styles are ‘steeked’ which involves knitting in the round and then cutting to insert arm holes, button bands etc. Not for the faint hearted! Until recently Gansey patterns were not written down, so knitters had to understand the mathematics and skill of being able to size and adapt patterns. I love knitting like this as I find it much intuitive than flat patterns, you can judge sizing and adjust as you go along.

I don’t know the detailed history but as I understand it, flat patterns, in which panels are knitted separately and then sewn together like a sewing pattern, was popularised when patterns started to be written down and distributed widely as paper patterns and in magazines. This enabled amateur knitters to access a much wider range of ideas and designs, but they can also quite prescriptive.

It could be argued that by writing down and recording patterns, some of the innate creativity and skill of the traditional knitter is lost. However, it is also probably the only way that gansey patterns will continue in a contemporary context as we no longer have that critical mass of knitters to pass skills on directly. As modern knitters, we tend follow patterns. I am proud of myself that I didn’t use a pattern for my gansey, instead it was more of a ‘recipe’ and I had to figure out the sizing and designs for myself by making swatches. Deb Gillanders of Propagansey is passionate about teaching without a pattern. I called her when I was thinking of making one and she said “I can’t sit and follow a pattern, it makes my arse go frilly. Know your tension. Knit a swatch. Just get on with it.” She says on her website “This approach works best for jazz or folk – classically trained knitters may get nervous. On the other hand if this is what you’ve grown up with, having to follow a pattern feels like climbing rigging wearing a safety harness.”

What is the future of hand-knitting as a heritage craft?

The future is looking great, there are a huge number of knitters in the UK and many talented designers.  However, it is a particular bug-bear of mine that ‘women’s crafts’ are often not give the same artisan status as crafts that were typically associated with men. They are considered the realm of the domestic rather than the artistic, and the preserve of ‘old ladies and knitting nanas’. This is changing though, and the new narrative around knitting includes extraordinary male knitters, trans knitters, black knitters, young knitters and knitting as activism, as well as women claiming and owning knitting as a way in which we define and express ourselves. Knitting is political.

• Read our values statement on what we mean by ‘heritage’

Our South West regional members’ network had a field trip to Mike Rowland & Son wheelwrights in Colyton today with @bestwheelwright and team! Thanks to Greg and co for sharing their knowledge and cream teas… eaten huddled under a gazebo in true British fashion!