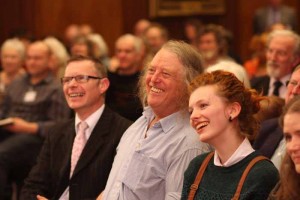 We returned home to the roots of traditional craft by going to Carpenters’ Hall, one of the main Livery Companies of the City. Unless you are a Liveryman, you don’t get to see the inside of this beautiful building, and if you like wood, then this was heaven!

We had a marvellous programme focusing on craft tools. In the morning Professor Trevor Marchand spoke, amongst other things, about the ways in which a maker uses tools, and he was followed by Dr Phil Harding of Channel 4’s Time Team who is a renowned flint knapper and made the tools for the new Stonehenge Exhibition.

In the afternoon there were three craftspeople at the top of their game which will be explaining about the tools they use: Roger Smith, who makes hand-made watches, Daniel Harris who established London Cloth using British wool, and Grace Horne who not only makes knives but also corsets. There was also an Instant Gallery featuring makers’ favourite tools, with an explanation of how they are used.

Then we had the very first Heritage Craft Awards presentations, where those who were recognised as the very best in their field were announced and presented with certificates and cheques.