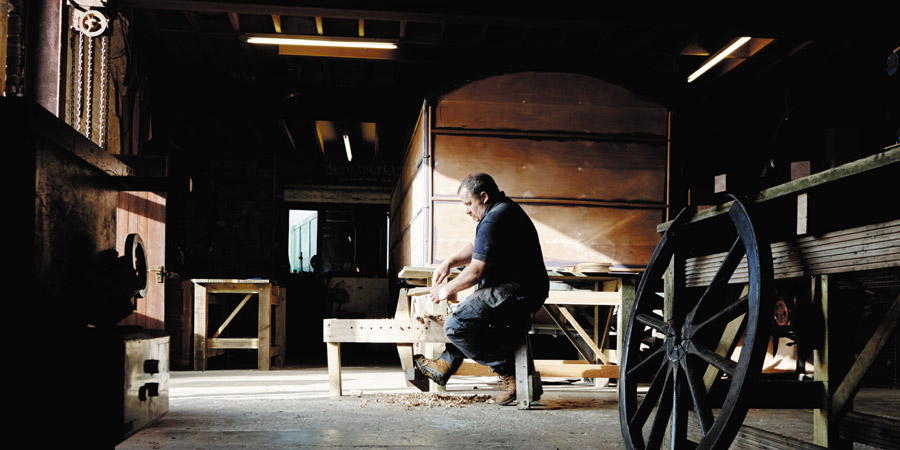 What happens when an apprentice moves on?

Mike Rowland & Son Wheelwrights and Coachbuilders dates back to 1964 and remains a father and son business of Mike and Greg Rowland, both Master Wheelwrights. The original motivation for taking an apprentice into the business came from George Richards, a young local lad who expressed an interest in becoming a wheelwright. From this initial approach, and his obvious aptitude for the craft, Greg saw the potential benefit in future-proofing his business and succession planning. George joined the business as part of the Livery Company Apprenticeship Scheme that gave financial support to craft businesses wishing to take on apprentices. He excelled in the job and became a fully qualified Journeyman Wheelwright and talented wagon builder.

In early 2020 George left the business to set up on his own. This is a concern cited by many small businesses; what happens when you invest in a trainee and they then leave the business? Despite George moving on and some obvious sadness at his decision to leave, Greg describes the process as having been ‘massively successful’ and that his business is now more resilient and financially viable for the future.

A move like this doesn’t come without its impacts. The biggest change that had to be made was in the costs incurred in insurance, wages and pensions. It is a big step for a small craft business to start administering and paying for an employee, and this was daunting to begin with. The workshop also had to be made safe and compliant, which was a financial hit, particularly with the machinery. Work had to be scaled up in order to keep George employed and new approaches had to be developed. However, Greg views this as a positive move forward and as a step change in the longer term sustainability of the business.

“It has increased our work and our resilience. I now have more knowledge of my own business and my approach to business…It has made me better at running my business.”

Heritage craft skills will have also benefitted as George is a now fully qualified wheelwright and talented wagon builder. Greg also comments that it has impacted on his own skills: “not the hand skills as such, but the business, promotion and people skills”, which are crucial to managing a viable heritage craft business and in keeping it relevant.

“I would do it again”

In a couple of years the business hopes to take on another apprentice and Greg is confident that this will continue to benefit both his business and the longer term sustainability of wheelwrighting.

Livery Company Apprenticeship Scheme – It wouldn’t have been possible to have trained George without additional financial support from LCAS which gave £16,000 over three years to the host business.