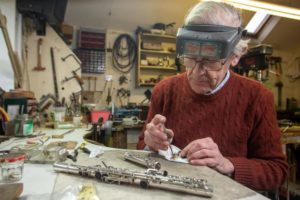 The Heritage Crafts Association (HCA) has set out to save British flutemaking by seeking potential trainees interested in learning this intricate and highly-skilled craft from a retiring master.

Stephen Wessel from Somerset is currently believed to be the last full-time craftsperson in the UK making fully handmade Boehm system flutes.

Stephen’s impending retirement, after 35 years in the business, not only ends a long and illustrious career, but could signal the end of flutemaking in the UK – a proud tradition stretching back to the nineteenth century.

Even before news of Stephen’s retirement, the scarcity of British flute makers had led to the craft being reclassified as critically endangered in this year’s edition of the HCA Red List of Endangered Crafts.

As the organisation set up to safeguard traditional craft skills in the UK, the HCA has teamed up with Jonathan Myall (a lifelong flute enthusiast and owner of Just Flutes in South Croydon) who has offered to host and support a trainee while they learn the craft from Stephen.

The successful applicant will be keen to learn, will have a proven ability to solve technical problems, and is likely to have existing engineering skills (such as those gained from precision silversmithing, jewellery or model engineering) which will serve them well when learning to make the key mechanisms that create the beautiful even tone for which these flutes have become famous.

“I started my working life as a research engineer. I didn’t care for it and left aged 26 to do my own thing… a good decision which I have never regretted, for I love making things and you can’t do much of that sitting in an office. Ours is still a great manufacturing nation and in my small way I feel proud to be part of it.”

For more details and application form, email Mary Lewis, HCA Endangered Crafts Officer, at mary@heritagecrafts.org.uk. Applicants should note that the traineeship is dependent on the HCA and Jonathan Myall sourcing additional funds once a suitable candidate has been identified.