Craft, work and the Luddites at 200

Should we the craft community be celebrating the bicentenary of the 1811 Luddite rebellions?

In modern usage in the UK to call someone a Luddite can be a slightly derogatory term used to imply someone is against all change and blindly rejects any complex modern technology in favour of older simpler technology.  Some people on the other hand are proud to describe themselves as Luddites and feel that it is about valuing the things that are important in life.

A very brief history of the Luddites; in the late 1700’s a host of new inventions threatened to transform the textile industry which up to then had been a skilled hand craft undertaken by self employed artisans. 1764 the spinning jenny, then Arkwright’s  water frame 1769 installed in the first real factories just down the road from me at Cromford Mill. The mill started employing 200 people mostly women and children the youngest being aged just 7 years old.

At this time weaving was undertaken by highly skilled and respected craftspeople who served a minimum 7 year apprenticeship. 1785 the first power loom appeared, by 1850 there would be 260,000 in operation in England and in 1811 the writing was on the wall.

The change in lifestyle is hard to imagine, the hand loom weavers worked from home with their families around them. The looms tended to be upstairs in front of long windows since before electric light, natural light regulated work. This is Edward Eccles the last handloom weaver in Darwen, Lancs. 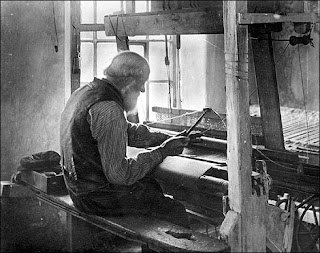 The weavers cottages are instantly recognisable today by the rows of upstairs windows. 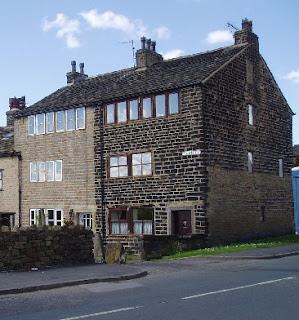 Would you rather work in the home above as a self employed skilled professional or in the factory below as an unskilled machine minder with low wages and few employment rights? 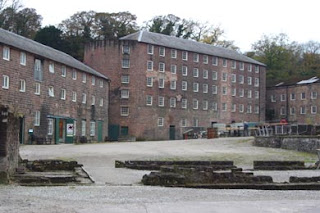 History is often taught as if this change was a positive development as it helped UK Plc on its road to world domination and produced goods that could be sold for less money. I feel differently but will try to stay dispassionate. From the Luddites point of view it was not about being against all technology it was about working conditions, the replacement of highly skilled work with low skilled and clearly lower wages.

My personal view is that the loss of social status and the difference between doing a job that is valued, which you trained for years to be good at and valued for are as important as the money. It was about power, in the craft model the artisan was empowered, in factory production all power lay with the factory owner. So the Luddites rebelled. Violence against machines was not their first move but the last resort. As early as 1778 the stockingers had attempted but failed to get an act through parliament regulating the “art and mystery of framework knitting”. The Luddites were highly organised, they nicknamed their fictional leader Nedd Ludd to protect their anonymity. On 11th March 1811 they broke wide knitting frames at a workshop in the village of Arnold in Nottinghamshire, they claimed the frames made poor products devaluing the craft and the owner was employing workers who had not completed the 7 year apprenticeship required by law.

The actions spread to surrounding villages and across the neighboring counties of Derbyshire, Liecestershire and then into the cotton mills of Manchester. Social historians see this is a crucial turning point in the development of a “working class” who became organised and exercised some power. It can be seen as the first step toward trade unions and workers rights. Framebreaking continued for several years, some concessions were made in terms of wages, rights, and release of prisoners accused of being ringleaders and attacks decreased after 1814.

So how does this relate to our situation today? If I choose to use a technology that demands high skill level rather than capital investment and I value self determination in my work, working for myself from home rather than for someone else as an unskilled machine minder then perhaps I do owe something to Nedd Ludd whoever he was. How remarkably similar this all sounds to the words of William Morris 100 years ago, both the honour of handwork and the social effects of labour management. How similar also to the recent books by Richard Sennett and particularly Mathew Crawford, “The case for working with your hands, or why office work is bad for you and fixing things feels good”

If we do choose to celebrate craft and Luddism though I feel it is very important that we do not blindly reject new technology and we are not perceived as backward looking. The internet has enabled many people to take that step away from working in the office to working from home, new technology can be be a change for good or bad, it is up to us to choose an appropriate technology and look hard at who benefits and who looses out of the different options available. Today is little different in many ways to 1811, we have to choose how we want to work, we spend a significant proportion of our lives and energy in our work, it is important that it should be empowering, life affirming, useful and productive.

Lots of info on Luddites on the web but this is better than most.