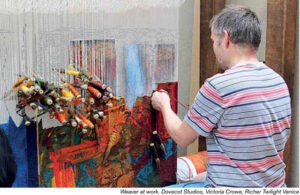 Colinton resident and art and craft expert Gill Colthart has been inspired by the historical drama television series Outlander to delve into the subject of Scottish indigenous crafts and here she gives us a bit of background to some of our craft heritage.

When I read the Outlander series by Diana Gabaldon, I was fascinated by the depth of her research. Considering she had never actually visited Scotland, Diana’s narrative was both interesting and accurate.  Apart from the elements of romance, mystery, adventure and time travel there was for me that something extra – and that was the references to indigenous Scottish crafts in the 18th century.

The main female character in the book, Claire, became involved with the local ladies in the village of Lallybroch, and sometimes joined them to learn new skills. In one memorable scene she came across a group of women sitting thumping and pulling wool over and back across a table whilst merrily singing together and tapping in time to the music.

What they were doing was known as ‘waulking’ which is the Gaelic name for the process used to soften and thicken fabric, and also make it water resistant. Singing together helped keep the rhythm and made the work more enjoyable  – and I would imagine that a fair amount of gossip was exchanged too! One person would start a song and the others would join in the chorus and as time progressed the tempo of the song would increase. The cloth was moved around the table clockwise as it was perceived to bring bad luck if passed the other way. There must have been hundreds of songs as it was also perceived to bring bad luck if any song was repeated during a waulking session.

Any feature on traditional Scottish crafts has to include reference to Harris Tweed®, now a world famous product. Originally much of the tweed came from cottage industries with crofters making rough cloth for their own use, with some of the surplus used as currency. It must have been exhausting work as everything from carding, spinning and weaving was done by hand by women working in very hard conditions, often outdoors in bad weather, with cloth that had been soaked in ‘household ammonia’, i.e. stale urine, in a process used to set the dye.

In the 18th century, the production of linen was a significant part of Scotland’s economy with a high standard of workmanship expected from the workforce. Each batch of linen was examined and inspected by stampmasters of the Board of Trade; one reason being to ensure that the middle of the bale was not inferior to the outside part which was visible to the buyer. Yes there were scams even way back then! Youngsters were apprenticed to a master weaver and an apprenticeship lasted six to seven years.

As with many other industries, linen workers also had their own terminology. There was a dirty muddy fermentation process called a ‘retting pit’ and ‘heckling’ was the word for the last step when dressing flax prior to spinning. The story goes that the linen workers in Dundee were politically active and given to voicing their opinions at political meetings – giving rise to the modern usage of the word ‘heckling’.

Tweed and linen are simple and practical fabrics so it may come as a surprise to know that a more luxurious fabric – silk – was made in Scotland. There were three factories in the Dunfermline area and one of them, the Winterthur Silk Factory, provided the duchesse silk satin used by Sir Norman Hartnell to make the Queen’s wedding dress. Princess Elizabeth was granted 200 extra ration coupons, but had to return others that had been gifted by members of the public, as they were not transferable. Apparently, a back-up piece was woven just in case the original did not arrive in London and a local girl who was married in 1964 was given it to have made into her wedding dress.

During WW2 silk was produced for the war effort, and synthetic silk was used to make parachutes. My Mother packed parachutes when she was based in Orkney with the WRNS, and it would not be surprising to find they came from the a Dunfermline mill.  I wish I still had some if it and would love to know its provenance.

There are far too many highly respected Scottish indigenous crafts to cover in one article –  Paisley shawls, Mauchline Ware, Darvel lace, shinty sticks, Orkney chairs, drystane dykes and Fair Isle knitting are just some examples but there are many more.

What is good to know is that with the current resurgence of interest in traditional crafts, many people and organisations are keeping the old skills alive.  A good example is the Dovecot Studios in Edinburgh which can be found in the premises of the old Infirmary Street baths. Originally established in 1912 by the 4th Marquess of Bute who recruited weavers to produce large tapestries for Mount Stuart House, his home on the Isle of Bute, it is now a world renowned centre of excellence. Dovecot not only continues a century long heritage of collaboration with international artists to make handwoven tapestries and rugs, but they also employ master weavers. They have a wonderful viewing gallery from where you can watch a master weaver at work and they also curate fascinating exhibitions and workshops. I definitely prefer perusing beautiful craftsmanship to the memories I have of standing shivering in a cold changing room. Maybe that is why I went on to be an art and crafts teacher but never did learn to swim!

The Highland Folk Museum is the UK’s first open air museum. Situated in Cairngorm National Park at Newtonmore, it has an extensive collection of traditional artefacts including pieces of tartan and traditional hand woven blankets. It is an ideal venue for a family day out as there is something for all age groups to enjoy.

If you are interested in learning a new skill there are a number of organisations who offer traditional craft workshops, including many private workshops run by extremely experienced creators.