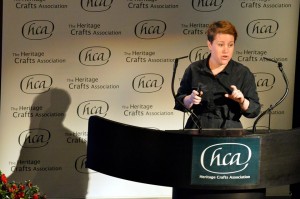 A Place for Craft was the theme for 2015’s conference which was held on Saturday 9th May at the V&A Museum.

The conference highlighted the relationship between crafts and location – focusing on those crafts which have developed in particular regions or locations, and why craftspeople have chosen to live and work in areas with a special tie to their craft. Speakers included Sir Christopher Frayling and Genevieve Sioka, artisan buyer for the National Trust, and makers and craftspeople were able to bring and exhibit the tools of their trade at the conference.

Sir Christopher Frayling has a deep interest in art, design and craft, and has written extensively on the subjects, including his book On Craftsmanship. He was Chairman of Arts Council England 2005­–2009 and has also been Chairman of the Design Council, Chairman of the Royal Mint Advisory Committee, and a Trustee of the Victoria & Albert Museum. He was a governor of the British Film Institute in the 1980s.

Christopher Frayling was awarded a knighthood for Services to Art and Design Education in 2001. He has written and presented television series such as The Art of Persuasion on advertising, and Strange Landscape on the Middle Ages.

Tasked with sourcing products with provenance, authenticity and spirit of place, Genevieve works closely with established and emerging makers alike to develop pieces for the National Trust shops, forging sustainable and profitable relationships for both parties in order to continue to support the National Trust in looking after special places for ever and for everyone.

With a background in lecturing Textiles and Printmaking and with a Masters in Multi-Disciplinary Printmaking, Genevieve now thoroughly enjoys being able to bring great British craftsmanship to the National Trust audience, encouraging shopping for a cause whilst telling the stories of great makers.

Her passion for all things rush led her to start designing and making. She and her team now cut 4-5 tons of rush a day during the summer harvest. They hand weave a range of work: rush floor matting, tableware, log baskets, handbags, cushions, hats and shoes.

Their work can be seen in National Trust properties in the UK, the Chateau Azay le Rideau in France, The Metropolitan Museum of Art in NY and they work with many designers, architects and shops here in the UK and overseas. She also teaches her craft here and in Europe. Felicity was made a Yeoman of The Worshipful Company of Basketmakers in 2009 and in 2011 Rush Matters was awarded the CPRE Mark in the Living Countryside Awards.

Richard Eaton, who was born and brought up in London, initially came to Denby Pottery in rural Derbyshire as an enthusiastic young student on work experience for his Master of Arts degree.  Richard instantly felt an affinity with Denby’s stoneware clay, designing and putting into full production a unique, and now collectable, range of giftware.

Richard returned to Denby in August 1987 after completing his M.A. in Ceramics and a B.A. in 3 dimensional design.  Within a short time Richard was promoted to Head of Design and subsequently Design Director.  Over successive years Richard has built up the Denby Design Team which comprises six designers and five technicians.

In addition to his work for Denby, Richard encourages the work of young new designers.  He has been a member of the panel of Judges for the Royal Society of Arts design competitions and an advisor on the Princes Youth Business Trust.  Richard was until recently an external assessor for M.A. in Ceramic Design at Staffordshire University and is currently undertaking special projects with a number of Universities.

Over one, under two – Straw plaiting for the hat industry was an occupation for tens of thousands of men, women and children throughout the United Kingdom in 1800s but with the introduction of imported straw plait from the Far East in the 1870s the skills began to die. By the 1930s the number of plaiters in the country could be counted on one hand. Veronica’s presentation will tell her personal journey to rediscover these skills. Her journey, started in the 1970s has taken her around the world and leads her to become a museum curator looking after the nationally important Hat Industry and Headwear collection at Wardown Park Museum, Luton.